From the snapshots of a moment and a pause, the appearance and disappearance, and the silence and fissure, the strange world reveals. GalleryJJ holds a solo exhibition of Leszek Skurski where the ordinary corners of our lives that reveals its existence in his purified screen of vast whiteness. He is a native of Poland, and currently active in Germany, who makes a great appeal in the United States and other European art scenes.

Skurski depicts instances in everyday life through canvas with a large margin. His canvas is an infinite field that smudges different whites and grayscales where tiny dark figurines appear and disappear in the center or peripheries of the field. As if they come from deep inside the canvas, from the opaque paint layers or the layer of different lights, the indeterminate figures arouse curiosity in which the infinite openness infers an acute narrative. He creates a recollection of an immediate portrayal of a moment, and therefore delivers a question on our existence and its essential meaning.

This is his second time holding a solo exhibition in Korea. The recent work portrays with a more brevity in his canvas, Skurski presents a tenderer and attaching affection of being. The exhibition title comes from one of his work, Stranger than Paradise, which reminds us of Jim Jarmusch’s movie with the same title. Skursku’s abstract world of monotonous realm and the strange senses within, where the moderate beauty arouses a special delight. This exhibition anticipates us to contemplate on the relationship between our everyday lives, and its visible and invisible worlds that surround us.

Finding a novelty in mundane routines is the topic of human attention. In this regards, Skurski’s work is interesting because of his unique method of, and stance on presenting that aspect. He composes an abstract scene in whiteness. His work is similar to a snapshot that portrays a pause, a moment in duration that is intentional mise-en-scene also. From its space, silhouettes of people are focused and all distracting backdrops are omitted. However, we can infer the spatial atmosphere like a beach, street, park, or a playground, with his slight suggestions of what they are. In this void of vast white, the slight gesture of figures is more perceivable and accentuated, even its stillness and silence.

The point of view is also peculiar. As if the image frame has been preset like Jarmusch’s movie scene, the figures enter the frame composition, with enough distance to establish anonymity and erasure of details. Skurski extracts an extremely special and focused moment, but no need to add details or colorful renditions. “You can focus much better to a scene when there is no color. So white is a great instrument for me to represent my thoughts. White is not always the same, but infinitely diverse and all my work have their own white,” according to him.

White yields an elbowroom to us. He operates the characters of white; its silence, spirituality and aeriality, with amazing precision and concision, as well as leaving enough rooms for things that are not tangible. Empty background is erasure for exposure. The figures about to disappear regains the vigor by this invisible being, in which the silhouette imageries then lingers more. Margins are never empty. Stories are open and the end is on the viewer.

The expunged white margin guides us to the realm of strangeness. The margin that extends even outside its canvas, and the faintly appearing figures in the open void, seem like indeterminately liberated without anything constraining nor shepherding. They rather obtained this ‘Empty Freedom’, fetched by existentialist Jean-Paul Sartre. The figures are isolated or punily connected. They are insignificant in the entirety, yet also the entirety is themselves and seized by them. Beings are constantly moving, individually or in groups, to find themselves a place to create meanings and thus entering the theater of life.

Absence is reminiscent of the universe where we experience gravity among others to relate each other and thus overcome existence. Skurski’s topic is always about human. Shadows created in vast whiteness, and its silence resonate among beings, in which our language of bodies forms a mesmerizing sensation. 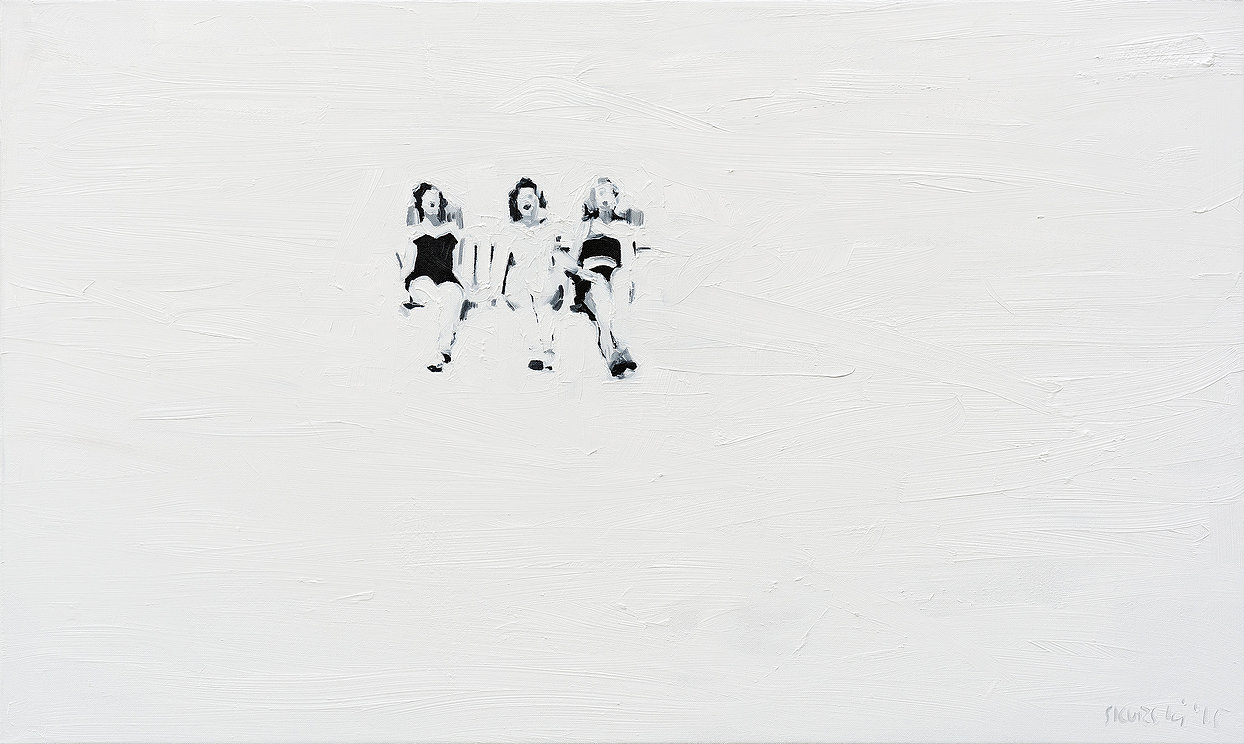 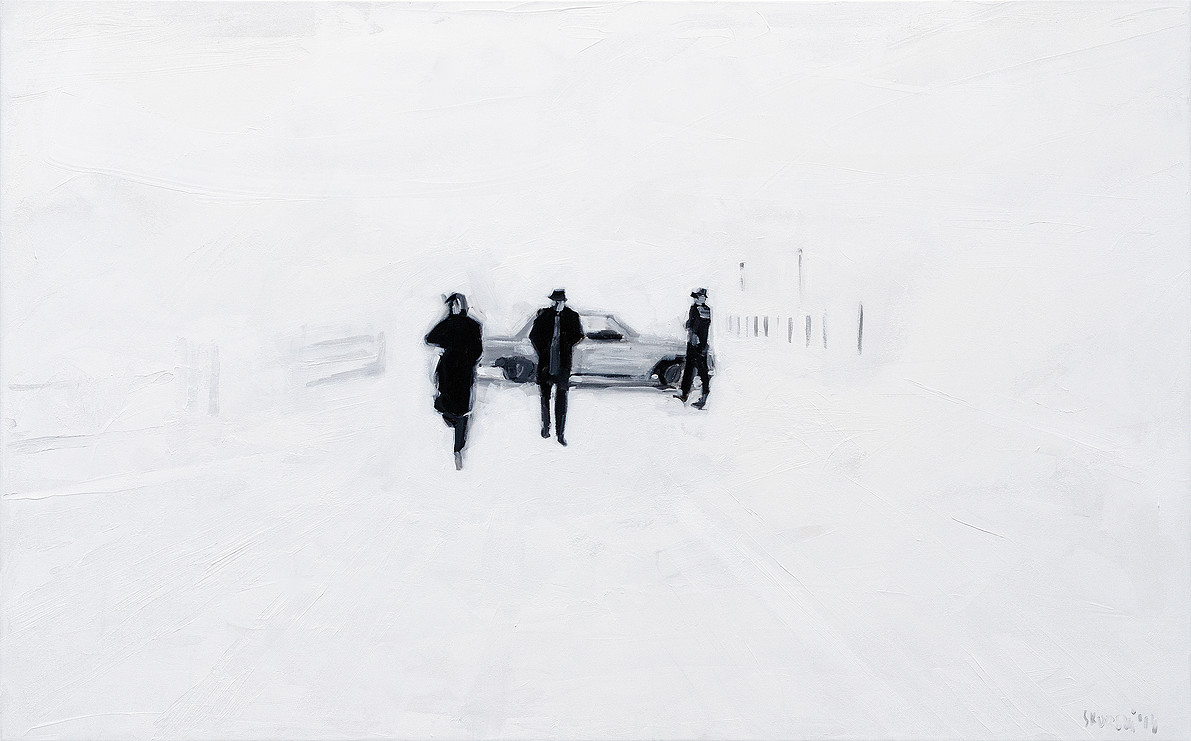 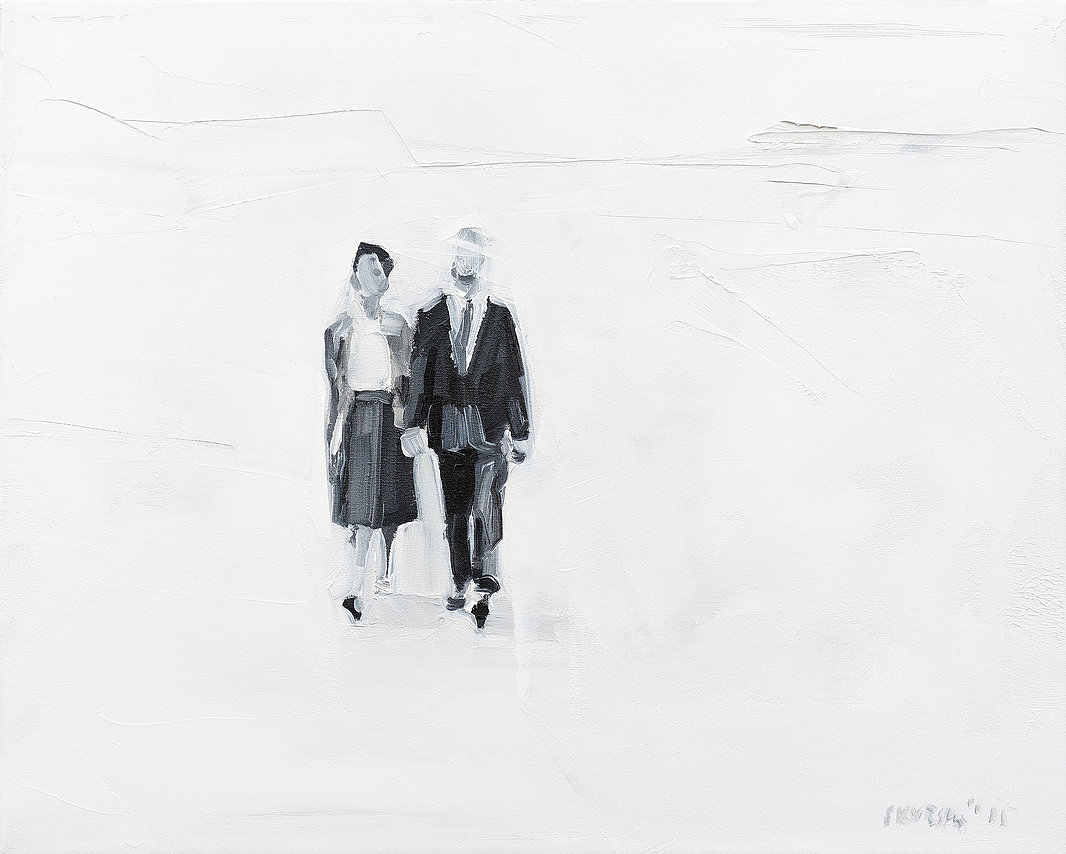 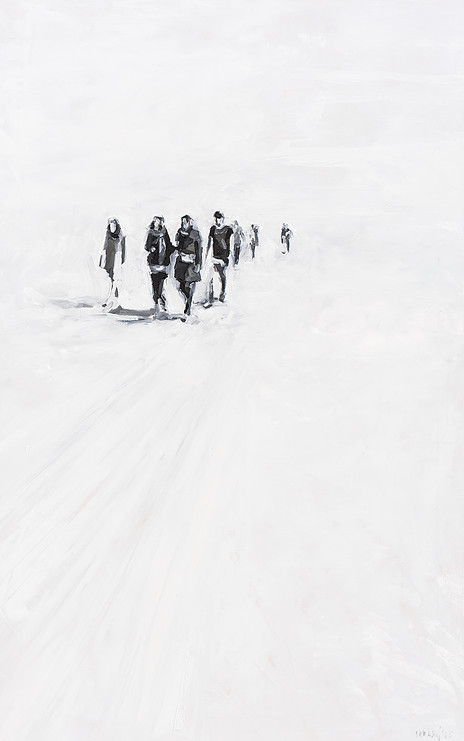